Pumpkin rightfully holds a lot of the spotlight this time of year. However, I think it’s about time to give it’s close running-mate a little bit of the stage. If we’re being honest, I would choose an apple crisp or pie over pumpkin

any day! Oh yes, I said it. Come for me pumpkin police!

I love the tangy and sweet taste of apple. I also love the crisp texture of raw and the soft, gooey texture of baked apples. Unfortunately, eating apple crisp on a regular basis would make me feel sluggish, bloated, and give me crazy blood sugar crashes. That doesn’t mean I’m not enjoying the decadent taste of baked apples, cinnamon, nutmeg, vanilla, and buttery almonds.  Instead, thanks to a few helpful Pinterest recipes like this and this, I come up with a delicious but also gluten-free, refined sugar-free, high-protein Apple Pie Protein Donuts recipe!

I love making a dozen of these donuts on Sunday meal prep to have for breakfast and snacks. They’re extremely easy to make and you probably have 90% of the ingredients in your pantry already. They are delicious dipped in coconut or almond milk, coffee, or warm herbal tea after dinner. And, they totally fit into your Life in Spandex Eat Guide! 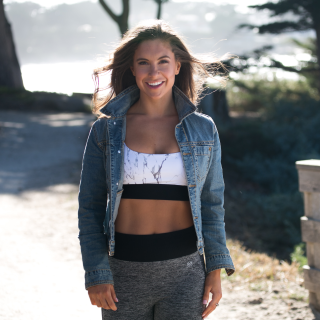